From graphs to maps

A Maptracker is a special backtracking algorithm used to check the equivalence of certain maps which can be represented as connected, directed graphs or finite state machines. It shall be described in this article.

The original motivation was to find an algorithm for reconstruction of grammars from finite state-machines with the following property: suppose you have a state-machine M0 and a function P which turns M0 into a grammar rule: G = P(M0). When we translate G back again into a state-machine we get M1 = T(P(M0)). Generally T o P != Id and M0 != M1. But how different are M0 and M1 actually? 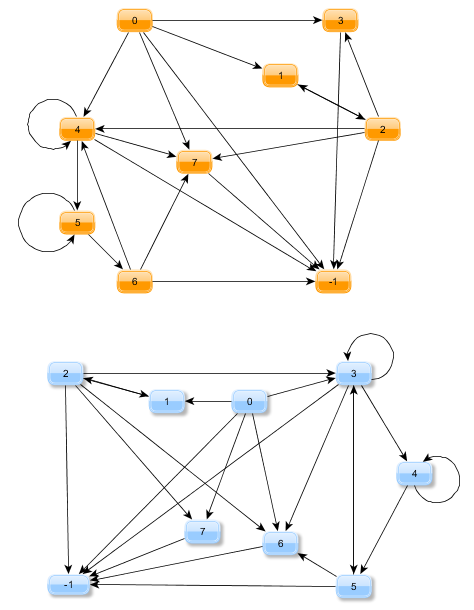 Watch the two graphs GR1 and GR2 above. When we abstract from their particular drawings and focus on the nodes and edges only we can describe them using the following dictionaries:

Maptracker is merely a cute name for an algorithm which constructs the permutation P from map representations of the kind GR1 and GR2. P itself will be described as a dictionary. Since the value -1 is a fixed point it will be omitted:

If no permutation could be constructed an empty dictionary {} is returned.

Let’s watch the dict which is computed by the Maptracker for GR1 and GR2:

We can check the correctness of M manually or by setting

and check the equality we have defined above.

This entry was posted in Algorithms. Bookmark the permalink.